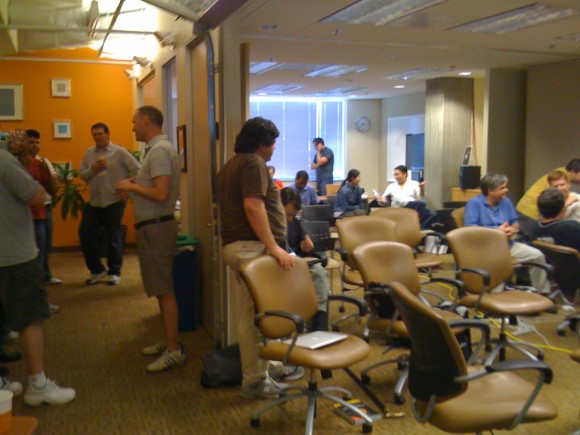 Some notes from the 2010 iPadDC conference, I typed as fast as I could. 2nd annual iPhone OS barcamp style un-conference with many good speakers and donuts. Yum.

Full slides might be available under the #iPadDC hashtag.

Walter Gropius, founded the Bauhaus. He loved Claire De Lune from Ocean’s Eleven, builds up in fountain scene. Find the simple. Discover the hook and bust your ass to make your app enjoyable. When in doubt, polish. Demo’d his mock up/wireframe iPhone app Brief. Really looks nice. http://giveabrief.com/ Ruby based BS script for mock up movement. Mentioned we should check out a Brett Victor mock up talk at WWDC. Video might be hard to find.

Things to worry about

Androidisms Back button kills app. Home keeps it alive. These are hardware buttons so this is the way it is. You can’t disable this. Android phones don’t get latest versions of the OS. And they don’t care because they’re going to sell a newer phone. So you have to support old OS’s.

BB partner $2000/year to be a partner. They’ll send source code. 1-on-1 support person. If you’re serious about BB, it’s worth it.

iPhone location services are awesome, spoiled. Others aren’t as good. The Droid rate limits how frequently you can get a location. Even between app restarts. Check time on the last known location. Nasty behavior for him to figure out.

Transforming page by page turning with deformation. Method returns a vector which is applied to a flat matrix. Each vertex in a matrix has an X/Y. The function adds a Z.

He basically showed how to implement the Apple iBook page turn effect in six lines of code using a Xerox algorithm from a one page PDF with some super heavy conic math. Super awesome demos he had. He’s been doing this stuff for a while. Very experienced, very nice chats after his talk.

Seven Ways to Improve Your App with Servers

Answered questions and talked about how to do analytics, marketing, ads and what iAds might affect the space. He had solid metrics and graphs that I can’t type out like he did last year with his Tap Metrics talk.

An amazing walkthrough his flurry of app submissions. He walked through ideas he and his team had for the iPad, demo’d his ELEVEN APPS and showed sales results. Shotgun approach gets a bit of cash but not really going to start a business. He had a lot of great insight like, “it’s not about making money but about getting your $99 worth and learning”. I’m not doing his talk justice. Cool guy.