I’m very, very early on in the effort of this graphics/game test. But essentially I wanted to write down where I’m at with Xcode, OpenGL and learning C++.

Learning C++ by starting with OpenGL is very stupid. I admit this. It’s the wrong way to start out. It’s like learning how to walk by jumping out of a Dodge Viper. But I want to get beyond the Hello World books and after trying for two or three years in my limited spare time, I’m finding that being thrown into the fire is somewhat motivating. I learned Java the same way (not that I’m a master of that either), I gave myself a goal that I really wanted to accomplish and the rest just fell into place because I couldn’t think about anything else.

Such is my animated box. I want to move a box in a really smart way. Not just some Box.setX(i++); Box.setY(j++) in the main() method but something smarter that would enable me to move two, four or one-thousand boxes in the future. 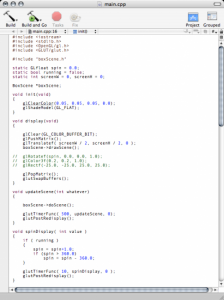