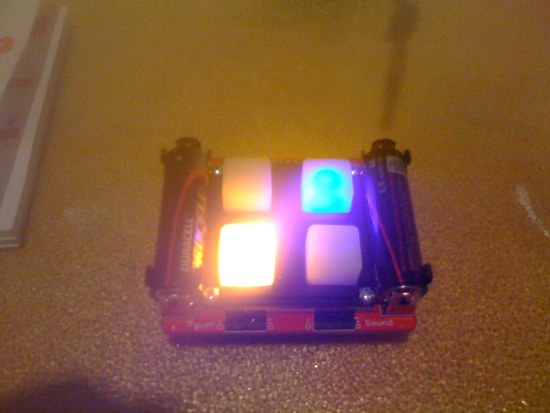 Sparkfun had their free day today. I tried to nab some stuff but their servers were too busy and I couldn’t sit there and refresh all day (what am I idle rich?). I just happened to have an order placed the week before and it all came in today.

Chief amongst the loot was a soldering iron and a simon game kit. Really, I could care less if the thing worked. I wanted to learn soldering. I seriously have never done it before. I couldn’t believe my eyes when the damn thing lit up and worked! I thought for sure my scorch marks had screwed something up. When I was soldering the legs on the mega-168 processor the thing got warm. I was working kind of fast and nervous. I guess I didn’t burn anything too bad. Many of my connections look like shiz and I have pointy parts all over the place. I was really trying to peer and study how the solder was making the connections. I’d shake and bend the pins to see how much strength it had and so on. I was really surprised at out unintuitive the whole process is. You’d think it’d be harder but after doing the same pins over and over you start to see what a good solder bead looks like. I just followed the instructions (some of which were a bit off because of a newer board rev) and it wasn’t too hard when I took my time and read ahead making sure I wasn’t doing something stupid. 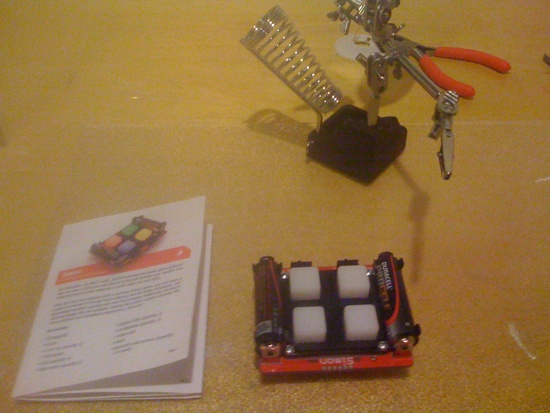 Crazy pants! I can’t believe it worked! The cheapy soldering iron and solder they sent with a starter kit worked really well. I just held the solder inside the plastic tube it came in. I thought that the cheapy iron would be crappy but it worked well. I got some helping hands to help. They helped. :D What was also helpful was having a workbench, damp sponge, helping hands and some youtube videos for instruction. It’s just not as hard as I thought it was. Now SMD soldering, I have no idea how people do that.

So really I was expecting the kit to be a learning experience and I’d throw it away. But somehow, despite the weird and PCB-stress-inducing battery clips, the Simon game worked. When it lit up and I played a little game of simon, I was really surprised. Kristin has it on the coffee table and she plays it a lot. I don’t think she ever played it in the 80s, weird. I tweeted about my success and the freaking official Sparkfun twitter account saw my #sparkfun tag and congratulated me. Awesome!

After a holiday break, a sudden rush of software-type-hacky-motivation came to me. I grabbed my arduino and laptop and checked it out. First, it didn’t work. The laptop is new and I had to set up the dev-env again. Apparently the default now is the ATmega328 and my Arduino is based on the ATmega168. After that was settled, I had a led blinking again.

So I had this Hitachi based LCD panel that I had never done anything with. I got it powered (3.3v) and was trying to figure out how to run the thing. I read and read and found that I didn’t have the right crap on hand. First, it seems like there’s two ways to drive it. You can drive it “manually” with a bunch of parallel type wires or you can buy a serial backpack and solder it on (I think). I tried getting things working parallel but it turned out to be a little more than I was comfortable with. I don’t understand multiplexing yet and I actually didn’t have enough hook up wires to get it done. So part of the order you see up top is a serial backpack. Well somehow I managed to get it wired up but it’d short out my Arduino board, I was just using the board for power. My LED would fade away, it seems to do that when I short something out. Thinking that this was a power problem, I plugged in the 9v adapter with the usb (5v). Well then I started smelling a plastic smell. I heard a crackle and then I saw a little bubble appear on the backpack chip. Ow. I threw it away and I don’t have a picture of it. All it reminded me off is when Tim and I burned up a southbridge on my old AMD computer. Smells like fail.

So I just played around with the broken backpack. I desoldered some of the headers off for practice. Desoldering is hard, I burned up the PCB pretty bad but it was a good learning experience. Then threw it away. I ordered a proper serial LCD from sparkfun. I recently got that working electrically although the code side of it I need to clean up a little bit and grok it some more.