I was working on my game store app and I had some TDD things I wanted to finish up before creating a rails3 branch. I discuss it kind of randomly in that post linked there. I had left it to languish because I got stuck and frustrated with cucumber. My app was working but the tests were failing (false negative). The biggest problem was trying to understand how to debug a cucumber step.

The first problem is logging. When cucumber runs webrat as a mock browser, I really expected to see the traffic in the server log (script/server). But it didn’t. Nothing. No traffic at all. The second problem was seeing what the browser sees. It was reporting back that my login was failing. The third problem is the problem itself. It was saying “invalid login”. I am using factorygirl to create mock users on the fly and authlogic for the authentication and so there was a possibility that something was wrong there. 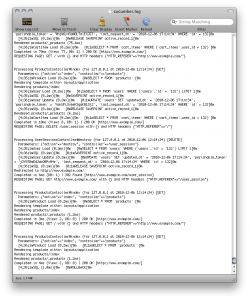 So let’s go through this in order. First the log problem. The traffic I was not seeing in the script/server console was kind of confusing. Cucumber’s traffic is actually redirected to log/cucumber.log. So you can either tail -f that log or use the OSX console app (screenshot) to watch cucumber.log. Either way, the traffic and any puts or STDOUT text will be there. It’s pretty odd actually. I don’t know how they pull this off. The dev server (script/server) doesn’t even need to be running for the cucumber steps to work. See below, I stopped the server and ran the tests successfully: 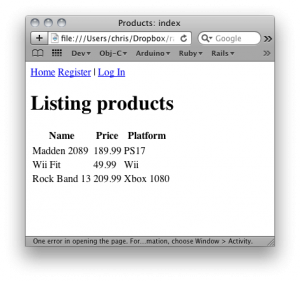 Next, the “seeing what webrat sees” problem. The invalid login error was based on detecting text. In my test app, when you’re signed in you see the Logout link. When you’re signed out, you see the Login link. Webrat was telling me that it couldn’t sign in because Logout never appeared. I had to figure out if it was lying because the app in my dev environment was working fine. So I needed to see what webrat was seeing when launched from cucumber.

I had hunted down a function called save_and_open_page but it never worked for me. It’s supposed to take a snapshot of the webrat client and open the web page in your browser so you can see what it sees. It’s like debugging with puts. So if you’re stuck on a step, just save_and_open_page and investigate. Well unfortunately, I had left that option for dead a while ago because it wasn’t working. I had missed a key step:

Now your default browser should launch with a simple snapshop of the page. It’s just a local file so you won’t be able to click on links back to your app (unless you have some awesome hardcoded urls everywhere that would take you back from anywhere). The idea here is to just look at what the client is seeing on a basic level. I was getting an invalid login error message so I was looking any evidence related to logins. You can see in the screenshot to the right that I have a Login link available. In my app, that means I’m not logged in. I put the save_and_open_page in the logout feature step of cucumber so this is a good thing.

Ok, so at this point my save_and_open_page was launching two pages. What? One was correct but the other one was incorrect. That is to say, one page was giving me an invalid login and the other one was signing in fine. So what is going on?

A key to my problem was how I was using factorygirl to create mock users and misunderstanding a convention. First, here is the non-working features/step_definitions/user_session_steps.rb file:

The login method is all about clicking the Log in link and filling in the username and password boxes. Now before you say, “what is john and funkypass?”. I tried many different variations of passwords. I tried my passwords out of my dev db, obviously this won’t work. I tried foo1/foobar which actually led to my one working and one not case.

So here’s what went wrong. My feature file defines two scenarios for one feature, logging in and logging out:

The “When I login” step fires the login method. But so does the “Given I am logged in” step. So there are my two save_and_open_page hits, the reason I see two pages open when debugging. But why would one work and the other one wouldn’t? I’m not changing anything.

The problem is factorygirl was creating a second user called foo2 for the log out scenario but rolling back the foo1 user that was created for the log in sceneario. I didn’t realize this when I hardcoded fill_in "user_session_login", :with => "foo1" during integration. So in the log out scenario, foo1 would log in but only foo2 would exist in the DB.

So I changed the login method to look like this:

Now when we run cucumber, we won’t get the error. But here’s the problem. Brew provides a way to link to the brew version of libxml2 by default with the brew link libxml2 command but issues a warning about doing this. The problem with using a path like /usr/local/Cellar/libxml2/2.7.7/lib is eventually brew will update it to 2.7.8 or something and it’s hard to say what the consequences will be. Most likely, some binary will fail with lib errors.

Another note is that I was futzing with all of this in a git branch called “tdd”, a branch I used to integrate cucumber/rspec and anything else related to testing. I read some advice somewhere that a good practice is to branch a new feature and then roll it back into master when it’s done.

So I was already in the “tdd” branch had already committed everything. It was time to merge the branches and get rid of the tdd branch: `# switch back to master git checkout master

run the tests again for sanity

After the merge, my code is up to date in the master branch and I can create a new branch called “rails3”, for example, if I want to play with upgrading the app to rails 3. Or I could create a branch called refactor if I was going to majorly overhaul code.