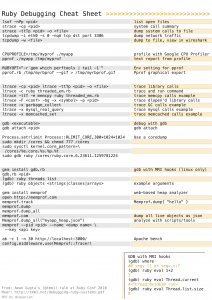 I watched Aman Gupta’s (@tmm1) talk on debugging ruby from Ruby Conf 2010. He did a really good job of walking through real world examples of debugging he’s done on even core Rails code and other very mainstream libraries. The talk was very deep and he had to hurry along to get through all the slides. So after the talk was over I really wanted a one-pager with just some reminders of the tools he used.

I recommend watching his talk in full and then referring to this sheet. It might make only partial sense otherwise. There also many other good videos from Ruby Conf 2010 on confreaks, as well as other archive conferences. It’s made it into my watch list. DHH’s keynote at Ruby Conf ‘10 is especially funny as he goes on about freedom and monkey patching (he calls it freedom patching).