Problems with "The Cloud"

I’ve been thinking about the problems with The Cloud outside it being a raging buzzword. It really comes down to Control and Connectivity. That’s the problem but allow me to elaborate.

Google Wave is a great example of control loss. If you really put a lot of energy, stock and trust into Google Wave as a content store for your team, brain or idea then you might feel deflated by its cancellation. Even as an idea and a disruptive alternative to E-mail or SMTP crappiness, it’s a shame it had to die. So what now? Wait for an open source version? Host your own?

The idea was to “put it in the cloud” and forget about it. But when the cloud changes outside your control, you have to be aware of it again. Now you really have to think about the cloud itself. It’s not such a vague black box which is what the cloud diagram really means.

Another example of control is YouTube. I use YouTube favorites as a persistent list. I see a cool video, I favorite it and I feel like I sort of own it, or at least it’s in a list that I can refer to later. But take a look at this: 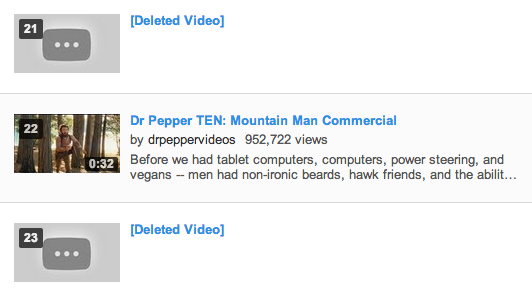 What were those things? Who knows! Now, I have to think about “the cloud” again. These are temporary videos that someone else ultimately controls. I’m just adding references to a list. I don’t own the clips. They are transient. They are ephemeral. I’m out of control again. I don’t even know what media I’ve lost. Do I mitigate again? Do I suck down a list periodically and do a diff?

I recently got a Roku box for my TV. It’s a great box. During registration it does a bunch of sign up and account creation. But it doesn’t work without uPNP enabled on the router. This isn’t even a connectivity outage thing, it’s a connectivity assumption that I have a certain kind of firewall that can’t have holes punched in it … or that I’m not capable of punching the holes myself. I don’t even really know why Roku does this uPNP thing. All I know is, it wouldn’t even finish the setup until I made this change. Now here’s a device that doesn’t work without connectivity or a clear path to connectivity.

Think about how picky that is for a second. If it’s not picky then think about how many technical barriers there are to pure or uniform Internet. Everyone brings their own quilted environment and it’s a mess.