I wanted to learn about how a 595 timer chip works. I’m a code dude. So when I see this integrated chip and all its pins, it’s scary. I’m sure an EE major is giggling right now but that’s just Impostor Syndrome. For no reason beyond this, I wanted to visualize and grok a 595 timer’s state at any given point by having it’s pins mapped to Redis key/value pairs.

Here’s a quick video explanation of the project.

Here’s my initial drawing on how I thought it was going to work. 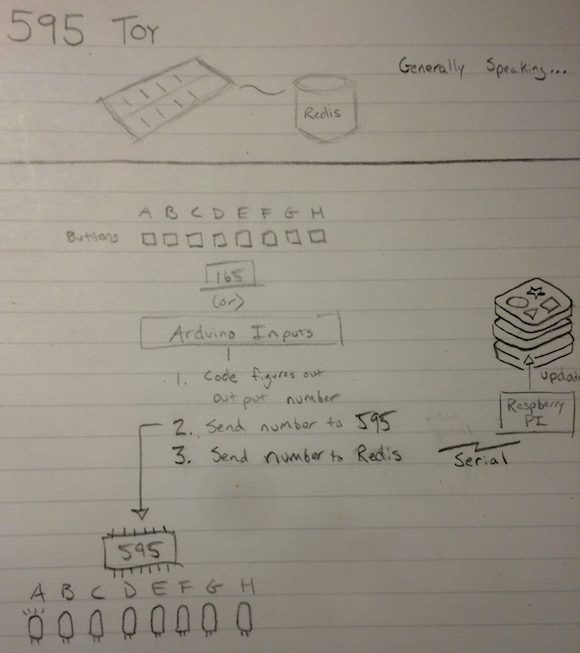 It didn’t work this way in the end. There were no buttons and it didn’t send the number over serial. Also, I did 3 bits instead of 8.

The 595 timer chip isn’t really scary. You can read about them on Adafruit but the real breakthrough for me was this interactive 595 timer toy online.

The biggest problem with reading values off the timer is that eventually it’s going to be sent to redis. And that means Ethernet and the rest of the stack. This is not very easy to do with Arduino even with a shield. I’m not really a huge fan of making the Arduino do “computer” things. I could have made the same Arduino read the values off the 595 but to me it seemed like it would look like there’s some cheating going on. So instead, I decided to have a Raspberry Pi read the values off the 595 timer. It has networking built in and it would give me a chance to learn about its GPIO.

GPIO is not what I expected. There’s some annoying security gotchas. You’ll get cannot access /dev/mem. You will get cannot read /sys/class/gpio/export. If I’m going to use a Raspberry Pi beyond this little toy, I need to figure these things out. I’ve tried adding users to the groups that ship with Raspbian but it doesn’t change the /dev/mem access. I think you don’t want to mess with permissions on that node, it’s too messy/risky even for a toy.

All that annoying stuff aside, reading values with the Ruby gem pi_piper is easy (although not perfect). It’s evented and that made me happy when considering what I would have had to have done in Arduino-land. It would probably be some kind of hardware interrupt and a whole lot more code than what I want.

Putting it all together 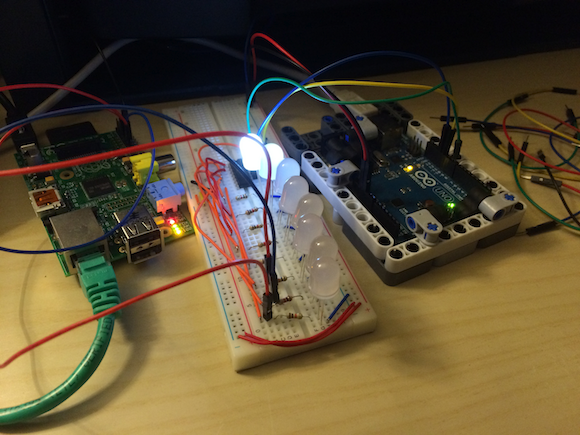 Here’s the ruby program output. It monitors Redis state and prints a table.

Nothing but this when trying to get things to work.

What? Even after bouncing my RPi I get this. What kind of clean up isn’t this thing doing? So now I fix it by doing this between program runs:

I also wish that you could break out PiPiper’s watch events to have two blocks for the same pin. Like when goes:high = bake brownies and then when goes:low = frost cupcakes. When you try to run two watches you get Device or resource busy. In fact, you get that error all the time no matter what you do. Meh.

What Did I Learn

The code for this project is available on Github.