Testing is a Gradient Spectrum

I’m reading the n-th article where someone mentions TDD (test-driven development) as a magic word that means “doing testing” or something else and I thought I’d write down a few things as a note. There have been nearly infinity plus one articles and discussions about testing and TDD. I don’t mean to pile on the old, dead and old-dead horse here but I just keep hearing language that makes me want to pull out a tobacco pipe near a fireplace and puff Well Actually … and that’s not great without helpful context and more detail.

So, let me TLDR this real quick. There is no right or wrong way to test if you’ve tried many different types and flavors and have your own personal preference. There probably is a wrong way to test your project if you have never had time, don’t care that much or someone sent you this link and this is just another opinion man.

The TLDR here is: 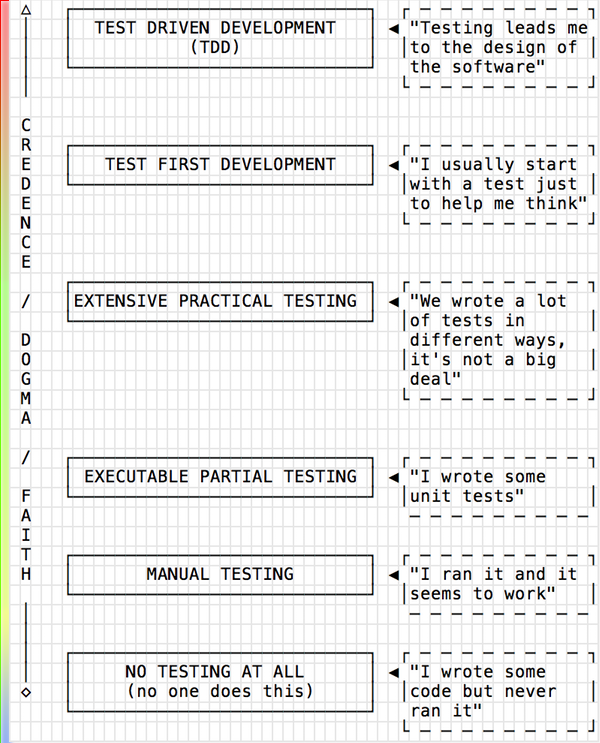 Me: Do you have tests?
Someone: Hehe, I know. We didn’t really have time for this project. Look, I joined late and …

No one does “No Testing” but people think they do. This is typing the code, never running it and shipping it to production or scheduling it to run for real. You never observe it running. When people say they have no tests they really mean they only only have manual tests.

Think about this with “hello world”. Someone would type out hello world, save it and put it somewhere as production and never run it. They would dust off your hands, say “another job well done!” and go home. No one does this. From here on out, this isn’t what I mean by testing vs no testing. By testing, I mean automated testing and that includes your local machine.

No one does No Testing. What they mean is Manual Testing. And this is the point about time. They didn’t have time then for automated tests and they are running manual tests now. Do they have time for manual tests now? Maybe. I’m fine with it as long as it’s an informed decision and it’s not causing bugs/outages/delays.

This is what most people do when they don’t have a test suite. You type hello world, run it, look at the output.

This is when there are tests but maybe only small coverage or one type (like unit tests only).

There’s a huge inflection between partial testing and manual testing. The manual testing project has never had time, doesn’t deeply care (or deeply know) and has had little positive experience (if any) with testing. There is a huge gap here in culture and minds. It could be developer minds, it could be boss minds, who knows. This is the mind-gap where you have to explain what testing is. This is the mind-gap where you try to tell stories and impart wisdom. This is where you try to explain the feelings of having tests at your back when you are trying to refactor or understand legacy code. Sometimes, you might sound crazy or religious.

Maybe people are trying their best. But I would argue that partial test teams haven’t deeply felt tests helping them stay on track and ship quality projects. If they can explain this blog post then I believe them. If they can’t, they haven’t had time yet and maybe they will. It’s not their fault but they also aren’t requiring that testing is a required tool of the trade.

Excuses can live here too. And some products are hard to test. But have these options been tried?

I would argue some of these things can be mitigated and you really need to reach for a lot of tooling and language features to fake some of this stuff. And maybe it’s hard to test everything But that’s why you don’t need 100% test coverage. But yes, some projects are hard to test. Some code is hard to test too but sometimes that can be fixed and the developer learns a ton about refactoring, their language and design.

I had a project where I thought AWS services were hard to test and my app was breaking in weird ways everytime I pushed it out. Then I researched a bit and found some tricks and my app wasn’t so different between my laptop tests and public reality.

Some form of complete testing where units are tested and the system is tested (like UI testing or regression tests).

Engineers on the team have a culture of including tests with work estimates and expectation. The organization either supports this kind of work explicitly or implicitly. It doesn’t really matter. This is a purely practical decision and there is limited value in “abstract testing values”. Tests exist, that’s good enough.

This probably means the project probably run many different test suites where regression tests are run occasionally but some other group of tests are run more often as code happens.

This is trickier than it seems. That means that git commits, pushes, CI and other tools all have this culture baked in. You aren’t going to run integration tests all the time. Everyone has to know that to be the quickest they can be. Scripts to separate tests have to exist. You can’t just run all tests that match under test/*.

Where this ends is in philosophy and world view. There’s no perceived value (at least as far as schedule, job, work, too busy etc) in doing anything differently. As long as tests exist, that’s good enough. It stops production bugs.

You simply write your tests before you start coding implementation. There’s a key difference to TDD that I will get to.

Or you can start a bottom-up test first:

It doesn’t matter. The thing you don’t do is write any code in src or lib. You don’t even start. You don’t even spike. You write a test. Hopefully your test is in a reaction to a conversation you just had with someone who is paying you. Hopefully your quickness to writing a test captures a conversation in an executable format that is checked in and lives and acts. Compare this with an email or a Slack message which sits and rots.

Pros/Cons: I don’t know many projects doing purely this. I guess the pro is not being religious about letting tests drive the design.

You let the tests lead design decisions. This is hands-off-the-wheel dogmatic stuff. You limit your thinking really. Requirements are captured early and tests are written first. But more so, you let go of the wheel. If something is hard to test, that means the design is wrong. If a test can’t be written then you don’t start the feature. If you can’t start the test, you ask someone a question. See how testing is the thing?

You don’t really need to do TDD to have confidence before deployment. But it’s trying to fight human behavior. Almost each step is trying to fight some historically problematic behavior (except for manual and no testing).

You probably need a tight feedback loop, tooling and automation to make this happen. It’s also not the best way to test just because it’s at the end of this list.

While working, you might just run your tests or tests that are relevant to your feature/work. But before you ship it to production, you’re going to make sure you don’t break everything right? So, just have a tool that runs your tests. Have the tool tell you when it passes. Don’t deploy until it passes. Call this continuous integration (CI).

After everything beyond manual testing, a non-obvious thing happens. Automation and tooling.

Would you have refactored and tried one more thing if you didn’t have tests?

Boss: “Hey, right now our calculator only has numbers on it. Could we put a plus sign on there and call it addition?” You: “Sure!”

You go to the repo and start work. You add some code to handle the addition, in this contrived world life is simple.

Ready to deploy? Great! Oops. Someone noticed that you forgot to add a test in case an emoji character shows up. Ok, write a test for that. What is your confidence like now? You have a lot of edge cases covered. Is it going to work?

How does this code work? What is it supposed to do? Maybe you have code comments (but they bit-rot), maybe you have language features like annotations, typespecs or something. Maybe you don’t. But how do you use the calculator from the previous example? Can it handle numbers that are strings? It can’t! Did you write that down? Can you, yourself remember in a few months? Tests really aren’t docs but they are executable and they can stand-in as docs, especially as API usage. So until you write docs (and maybe you won’t), tests can act as capability documentation, ala “What was the developer thinking”.

You have this testing habit now, why not add some libraries?

When you run your tests:

Notice all these enablers and multipliers happening now that you have a test step.

Let me head back to the start of the spectrum. “We don’t have tests”

Compare the workflow where someone just types a program and copies it to a server and then closes their laptop. It seems insane from the very dogmatic land of TDD because their point of view is beyond just “having tests”. But that doesn’t mean it’s “best”. But there is a knowledge gap between each of the points on the spectrum. I’m ok with ignoring parts of the spectrum for a project if it’s understood. If you can explain this blog post to me then we’re cool. If you cannot then I feel like there is a blind spot and any pain points the project is feeling is fair game to improve. If you can explain this post then I’ll mark it up to semantics. If you cannot explain the spectrum to me, then the term TDD is being misused as “testing” and I’d like to explain and help because there is some wisdom to be shared.

There’s very little right or wrong in all this. I am trying to communicate that “no tests” does not mean “no testing”. You are probably doing manual testing. And for certain projects, who cares? Do you care? Do you see yourself hating the manual testing? Then automate it. Are you manually typing in a test user and password, clicking a login button and then clicking around to see if anything broke? Does that annoy you even to talk about it? Then automate it. Are you hand-crafting test data and sharing it with colleagues? Then automate the creating of your test data.

There’s no such thing as no testing and TDD is not completely required although I have enjoyed TDD or Test-First quite a bit when I’ve had the opportunity to use it as an approach. It’s not required to go all the way to TDD because testing is a gradient spectrum.