Knowledge debt is then you don’t spend the time to catch up. This is Part Two, discussing common knowledge gaps in technology projects regardless of company, industry, project or people. Part One is here and talked about Troubleshooting, VNC, X11, Version Control, Sudo and Cron as common debted areas. The original post that posed the questions is here, where I wondered why the same patterns happen from project to project, company to company and person to person.

However, most projects actually don’t work out like that. In the movie Ironman, Tony Stark invents a mini arc reactor which powers his suit. The antagonist asks an engineer to build what Tony Stark made. The engineer says he can’t do it, I’m not Tony Stark. Of course it’s just a movie but I feel it rings true. Maybe it’s going on where you work. Here are some symptoms:

It’s called being “one deep” and it’s not where you want to be. However, sometimes it’s impossible to find qualified people to support an effort. Maybe it’s money, maybe it’s recruiting. I don’t know. It’s certainly not a problem at a single company. I suspect it might have to do with the specialized nature of Enterprise Software. For example, a generic problem is only bound by budget. If you have an array sorting algorithm to write, a database schema to design and a cluster or Apache servers to set up; it’s going to be really easy to find these people. But if you have a Documentum connection pool performance problem when using AIX 5.1 for SCO mainframes but only when using the thick Oracle database driver that’s being load balanced by a … blah blah blah; it’s going to be really hard to find someone that’s done whatever craziness you’re doing and then even harder to find someone who immediately knows how to fix your problem.

What I’m talking about is COTS. COTS stands for “I don’t want to take a risk” software. It means you’re going to buy vs build. It’s been a strategy forever and yet we’re all not on the beach with the information problems of the world solved for cheap. Of course, reinventing the wheel is not the greatest approach either. There’s a middle ground, not directly in the middle, that’s probably the best approach.

I was tasked once to get a workflow engine running. A meeting happened and there were suggestions like buy a workflow engine or reuse a web service out there somewhere. The web service of course was BPEL compliant. BPEL is a pain in the ass and I thought it was overkill just to do notifications when something happens. I implemented OSWorkflow as a library and it worked out fine. In the end, the effort was changed completely and my time was filed under Cheese Movement. If I had killed myself getting a BPEL workflow engine working, I would have been a lot more upset when the project was canned. And even worse, if it hadn’t gotten canned and the project went live, they’d have an overcomplex system that’s harder to hand off to cheaper support staff. In the end, a workflow library was easier to integrate than a stand-alone COTS workflow product.

Anecdotal argument aside, something is broken. Is it a complete lack of development skills in systems engineering? Is it a fear of concentrated thinking? Do customers react horribly when you pitch “we’re going to roll our own”? Maybe it’s eating your own dog food: if you used Sybase on one project, why would you store your preferences in XML? Let’s use Sybase again even though it’s impossible to find Sybase people! Yay!

And even if you are allowed to roll your :

I say bring the solution and not the language. Instead of harping on “you shouldn’t have done it that way”, say “I’m glad you got it done, now we own it and you’ve created an asset for us”. Don’t FUD. Just do it.

Anyway, copy and paste changes with the application and OS. Here’s some examples:

I want to re-iterate that last point because I’ve seen this for years. Copy on select is hard to grasp for Windows-y people. I see people copy a bunch of text from Notepad, move their mouse over to the putty window and click on the right-ish portion of the screen. When the click, a large white line has appeared and then they paste. Nothing but blanks! What the hell happened! Argh! I hate computers! 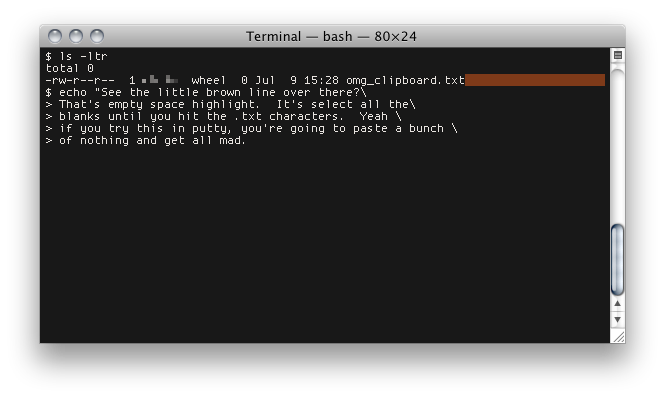 Linux virtual consoles sometimes have a mouse pointer (btw I’m talking about the Ctrl+Alt+F1 - F6 consoles if you walk up to the server). On RedHat, it has this by default. It’s a little mouse driver and it’s handy for copy and paste. Select some text and right click. It’ll paste in. But this clipboard isn’t shared from the virtual console to the X11 GUI or to an SSH client.

As you go from project to project, some patterns should emerge. You should see the same themes over and over in different software packages, different approaches to a problem and in the problems themselves. I’m not the only one who’s noticing patterns. I’ve met lots of smart people that can relate one thing to something else that they know. It’s a good sign that they are paying attention.

But of all the recurring patterns, hierarchies are the least discussed. I don’t know why I notice hierarchies so much. Maybe because I’ve been working with LDAP a lot lately. Maybe I’m a tree hugger. Bam. Pun’d.

Hierarchies organize. Hierarchies can’t avoid defining relationships. A hierarchy has at least one path to get to a node and to that point, hierarchies have paths.

Here are some hierarchies and typical paths:

These are just example paths, they are not how you’d persist these things. For example, a workflow can be stored in XML, which is similar in structure to an HTML document: `