A Different REPL Workflow in Ruby

Normally what I do is open an editor and start coding. In Textmate, I’ll hit Cmd+R to just run it as a big procedural file for something simple. If it gets too complicated, I’ll put it in a class. If something is confusing, I’ll break out to irb. The problem with this workflow is that you have to copy and paste a lot of code back and forth to get to “the breakpoint”.

In rails, I’d just put a binding.pry and magically, I’m at the breakpoint to play around at that point in time. No copying and pasting. Nice.

After watching a bunch of destroyallsoftware screencasts though, I like his one setup from episode #7 where he inlines rspec tests. Combine this with watchr and I might have a new favorite.

Let’s say I had the following hello world example.

When I run it in Textmate with Cmd+R, it doesn’t do anything. Because there’s no “main”. So then I have to add:

Great! But wait a minute, when I use it in another class, it’s going to print “Hello Variable!” out. So then I take it out? Then to test it again, I put it back in? This workflow although easy kind of sucks.

So let’s just inline some rspec. But before we even do that, we need rspec and watchr. We are going to use watchr to watch our files for changes. It’s best to install rev (Linux) or ruby-fsevent (Mac) for filesystem event firing. 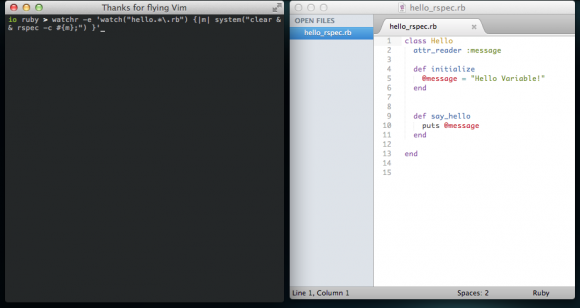 When you save the file (even without changes), it should say: `No examples found.

Now we will get this nice rspec to the right **in color** immediately upon saving: 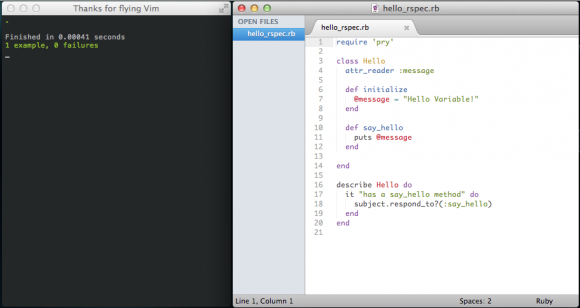 So how about irb? What if we want to learn/play in the code? Well now that we have a class and a shell instead of Textmate, we can use pry again.

And now when we save, we’ll be popped into a Pry shell. 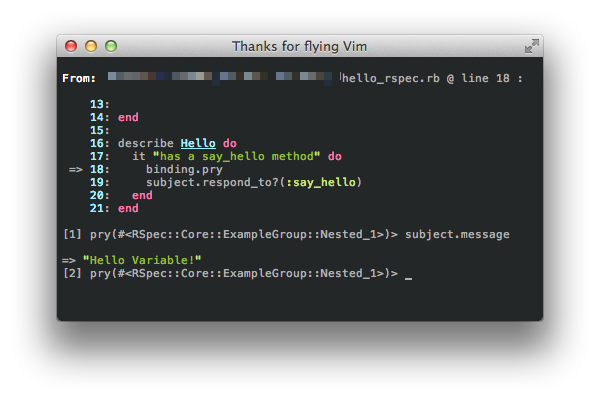 So give this a shot and see if you like this as an alt workflow.